Great news at Venicemarathon: the first Half Marathon in Venice is born! 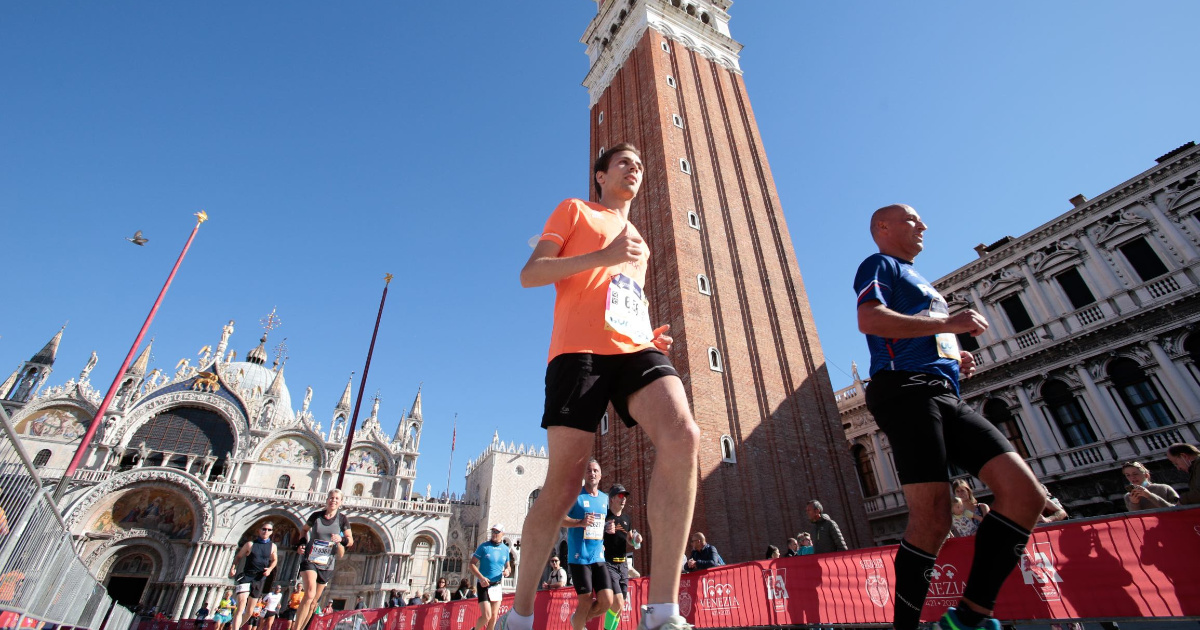 On Sunday 23 October, together with the classic 42K and 10K, there will also be the first edition of the new half marathon organized by Venicemarathon and with a limited number for 2000 lucky ones. Departure from Piazza Ferretto in Mestre and arrival in Riva Sette Martiri in Venice, along the same spectacular route as the marathon.

Monday, May 16 2022 - The Venicemarathon is done in three! On Sunday, October 23, in addition to the 36th edition of the Marathon and the 10 km, for the first time in Venice it will also be possible to choose the classic distance of 21,097 km. The unique experience of running in one of the most beautiful cities in the world will thus become a dream that is finally achievable even for the many enthusiasts of the half marathon.

Registration and limited number
The event is already on the national calendar of the Italian Athletics Federation and registrations have been open for a few days and available on the official website of the event, in the special 21K section.
For this year the bibs made available for the 1st UYN Venice Half Marathon are only 2,000. A well-considered choice by Venicemarathon which, as in all its events, always opts for a gradual increase in numbers, to guarantee quality services, maximum organizational efficiency, but above all in respect of the urban and environmental context in which it takes place. In addition, registrations for the marathon and 10K with already 5,000 subscribers are proceeding.

Race course
The race will start from the 'living room' of Mestre, Piazza Ferretto, in the shadow of the tower, after which the competitors will pass through the renovated central area of ​​Piazzetta Coin and via Poerio, and then touch the new M9 museum complex and reach 'Piazza XXVII Ottobre', commonly known as 'Piazza Barche'. From here, you enter the traditional route of the Venicemarathon which passes along the Salso Canal, the green avenues of the San Giuliano Park and the Ponte della Liberta, to then enter the heart of Venice, where the athletes will face the extraordinary route flush with the water. water, appreciated all over the world for its uniqueness, up to the finish line in Riva Sette Martiri. The route was designed together with the Municipal Administration and the Local Police to cause as little discomfort as possible to citizens and avoid the prolongation of changes to the road network.

Three starts and a single long colored snake up to Riva Sette Martiri
The first race to start will be the VM10K which will start at 8.30 from San Giuliano Park, followed by the UYN Venice Half Marathon at 9 from Piazza Ferretto, and then the Venice Marathon from Villa Pisani to Stra scheduled for 10 am. Riva Sette Martiri will welcome all the competitors' arrivals uninterruptedly from 9 am to 4 pm. A very long colored snake will unite Stra in Venice in an ideal embrace

A year of Venicemarathon events
Venicemarathon is renewed and thus further enriches an increasingly complete and transversal sports and tourist offer, well distributed throughout the year and which embraces people of all ages and abilities. In fact, we remind you that Venicemarathon organizes every spring the CMP Venice Night Trail which took place on Saturday 9 April with over 5,000 members. On 11 June the appointment with the BMW Jesolo Moonlight Half Marathon-10K and Alì Family Run will be renewed, while in autumn the 4 Alì Family Runs will return and at the end of October the 'highlight' event, the UYN Venicemarathon 42K-21K -10K (Sunday 23 October).
"The new competition conceived to offer further possibilities completes the initiatives proposed by the Venicemarathon, contributing to the involvement of 2000 sportsmen in a context of territorial connection of the metropolitan area. A further opportunity to experience one's own city starting from the 'living room of Mestre' to finish in the heart of Venice. I believe that this new competition will give a further boost to the union between Venice and Sport "- these are the words of the Deputy Mayor of Venice Andrea Tomaello.

"The inclusion of the half marathon in the Venicemarathon is a project we had been working on for some time and that we already wanted to launch in 2020, then postponed due to Covid. We therefore thank the Municipal Administration for their willingness to welcome this our new proposal, which also arises from the many requests received from the world of running" comments the president of Venicemarathon Piero Rosa Salva. 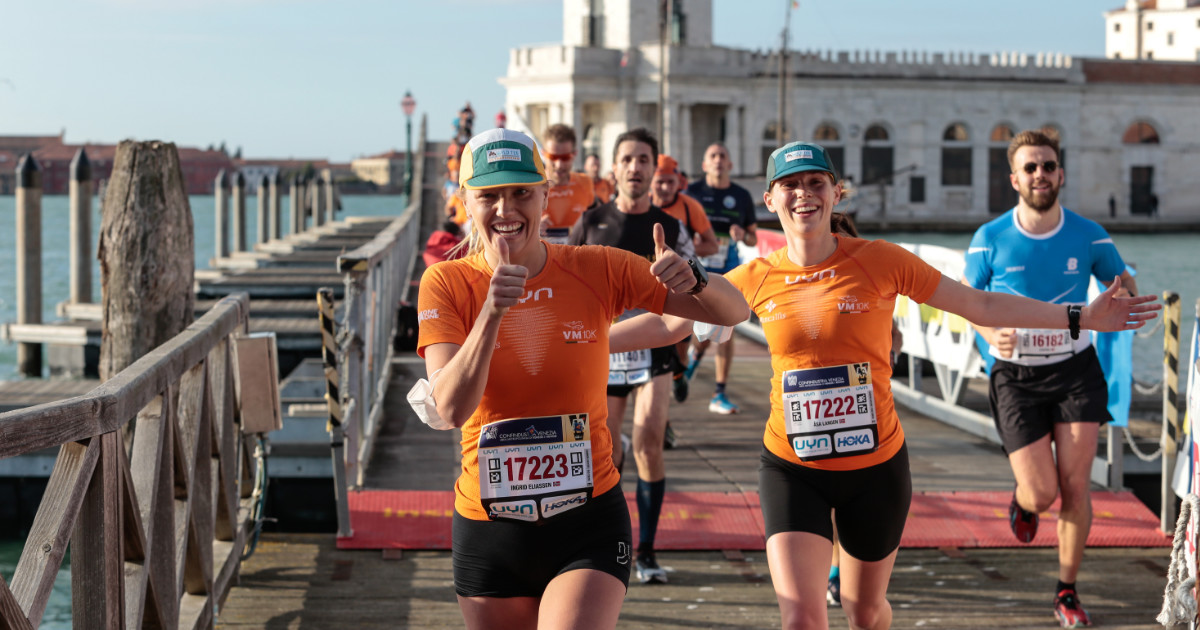 The Italian brand UYN, already technical sponsor of the Venice Marathon since 2018, will be this year title sponsor of the 36th edition scheduled for Sunday 23 October.


Tuesday, March 22, 2022 - The sponsorship agreement between Venice Marathon and the Italian functional clothing brand UYN® - Unleash Your Nature, technical sponsor of the event since 2018, which for 2022 also acquires the title, enriches and became "title & technical sponsor" of the event.

This partnership that is further strengthened, by virtue of a sharing of common intentions and values, such as high quality standards, technological innovation, respect for the environment and a great passion for running at all levels. Also this year all runners will find in the race pack a very high quality and great value technical T-shirt that will be presented in the next weeks.

"Venicemarathon has always been characterized in its almost 40 years of history by a constant commitment to innovation and excellence - underlines the president Piero Rosa Salva - Values ​​that, since the first contacts, we have found in UYN. The harmony was immediate and fruitful and we appreciated the proposal of the president Marco Redini to strengthen the already fruitful collaboration this year. I am sure that this important agreement will produce important promotional and operational potential. "

“With the successes of the previous editions, the result of the extraordinary organizational quality of the president Piero Rosa Salva and his team, it was almost natural that the relationship between UYN and Venicemarathon entered a new phase. As an Italian brand, we are proud to increase our commitment and place our name alongside a one-of-a-kind event, which makes the beauty of Italy known throughout the world. The decision to become Title Sponsor of the 36th Venicemarathon reflects the desire to establish ourselves more and more in the running sector through the quality of our products ”- these are the words of UYN CEO Marco Redini.

The flow of registrations is very positive and numerous are arriving, with a recovery also of foreign runners after the difficult period of the Covid19 pandemic. Right now, over 4000 people have registered for the event.

There are eight months left to the start of the 36th UYN Venicemarathon, but there are already many companies and brands that have confirmed their willingness to continue their path alongside Venicemarathon. This is the case of the American company HOKA which for the third consecutive year will be the "official shoe" of the Venicemarathon; of Pro Action, the company that deals with the formulation and marketing of supplements for sportsmen, alongside Venicemarathon since 2017 and which has already confirmed its commitment for the next three years as well as Alì, the important Paduan company of large-scale distribution which since 2016 has been promoting the “Alì Family Run” project together with Venicemarathon and which will continue for the next three years. And then, San Benedetto, 1 / 6H Sport, Palmisano and the media partners: Corriere dello Sport, Tuttosport, Correre, Sport Economy and IL Gazzettino.

Runners love is when your sweet half organizes a weekend in the most romantic city of the world...
... and you accept to run the marathon there together!

It's almost Saint Valentine's Day, so here you are 2x1 SPECIAL PROMO for the Venicemarathon: from 12 to 14 February sign up in 2 for the price of 1!

LOGO
This website uses technical and third parties cookies to guarantee a high functionality of this website. By clicking on accept button, you declare to accept the use of cookies.
Ok Decline
More information